Ohhhh going for the fun ones… okay.  I can do this.

This is honestly a hard one. There’s so many that that I don’t like. But I’m going to try to limit it to tropes that are often found in romance.

The whole 'if a woman has sex she’s evil and a whore.' I think I started hating this trope back when it was the trope-du-jour of Buffy The Vampire Slayer. Seriously, it’s hard to watch the show when you realize that Buffy gets punished each time she has sex and that Cordelia, Buffy, and Faith are continually put down for wearing “Provocative Clothing” and having sex.

In romance novels it often shows up in the heroine’s or hero’s thought processes when it comes to another woman having sex, being interested in their love interest, or as a way to distinguish the Designated Heroine as the “Good Girl.” which leads us to…

I want this to become a discredited trope so very much. The problem with this trope is that it’s sexist as fuck. It assumes that being “like other girls” is a bad thing. That being a girl is wrong. That being feminine and liking stereotypically feminine things is wrong.

I get it. Authors want their heroine to be special. To stand out. To shove into the readers' faces that this person is worthy and deserving of the hero and of love. Except there’s the implication that other women who are not “special” or who ARE like other girls aren’t deserving of love or the hero.

The thing is love isn’t deserved. It just is. You love who you love, and you shouldn’t need to be “special” to be noticed. Just be yourself and be happy with yourself, and there is someone out there who will like you for you. If we saw more “Hey I like this person for no other reason than I like them.” I would be so happy.

Entitled to Have You

This trope shows up a lot in real life and is often the rallying cry of “Nice Guys.” But the core of it is that because someone did something nice for you, they are entitled to have your love, affection, sex, etc.

It’s also a rallying cry of fandom when it comes to shipping…. X character is so nice and perfect and self-sacrificing that Y is being a horrible bitch for not returning their affections. And I’m like oh hell no. Because that’s literally what I was told about the guy who stalked me for over a year and almost raped me by my school’s social worker.

I didn’t owe my stalker anything. It didn’t matter if be bought me flowers, or wanted to walk me to my classes, or if he was cute, or a star athlete, or popular. If I didn’t want to date him, I didn’t have to. And that is true as much in fiction as it is in real life. It’s also something that a lot of men feel justifies Marital Rape. So yeah. I have opinions about this.

This is sort of a global trope that covers a lot of things. Things like emotional abuse, verbal abuse, and actual physical abuse. Things like negging. Or saying “you can’t see your male friends” -- it's the bread and butter of the Bastard Boyfriend and Jerkass Heroes.

You see that… that’s controlling.

And it’s being portrayed as romantic.

And this is stalking being portrayed as romantic.

This is why clear consent is important and if a person says “No” or “Stop” the hero needs to respect that. This goes for kissing. Buying a drink. Or even paying for dinner. It doesn’t matter if the two end up falling in love -- just because the love interest overlooks the abuse doesn’t make it any less abusive.

"Not If They Enjoyed It” Rationalization

I don’t care what the reason is. I don’t care if both parties had orgasms. If the consent wasn’t mutual, informed, and unambiguous, it’s not okay.

So this brings us to the second part of the ask.

Short answer: I hate it.

I’ve inadvertently caught the movie on HBO and from what I’ve seen I’m glad I skipped it. 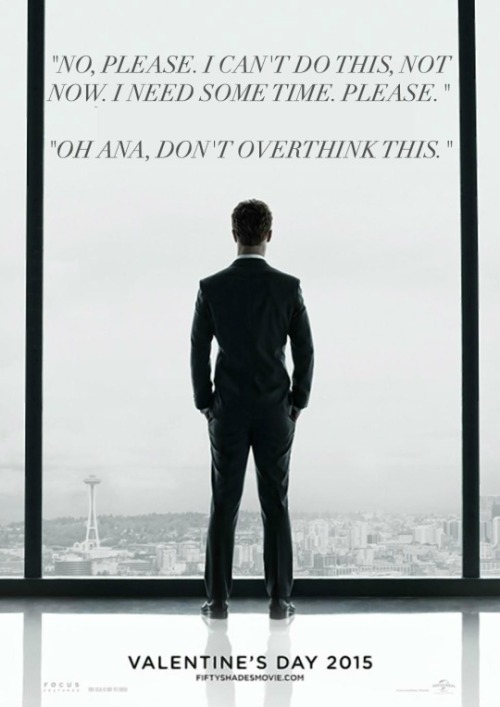 Because of lines like that. That’s coercion. That’s dubious consent. That’s sexual pressure. And It’s something that I’ve personally experienced.

There’s been a lot written about this. 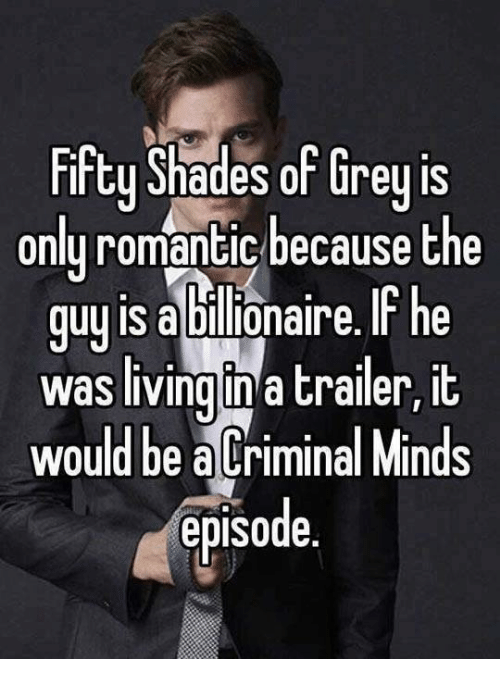 And it also sets up the double standard that Rich, Het, Cis, White Men can get what they want even if it illegal without suffering any repercussions.

So yeah. I hate this book.  I hate what it represents. I hate that it’s held up as an example of good romantic fiction. And I hate the backward step that it is.

Thanks for the ask!