So here’s the last part of my ranty Christmas special review for you. If you missed it, you might want to check out Part One and Part Two for the rest of my diatribe, because fair warning: I’m about to go off. Like swear words and invectives off. Because nothing pisses me off more than romance authors who shit on the very genre that they espouse to love.

So in the second part I mentioned that Cullen, our main male character, does not get the girl.

Oh,  Maddy gets a happy ending. Just not with him. Which I mean good. Cullen’s an asshole but Maddy gets her ending with a guy who – I am not joking – has all of three lines in the whole fucking novel and whose romance is summed up thus… 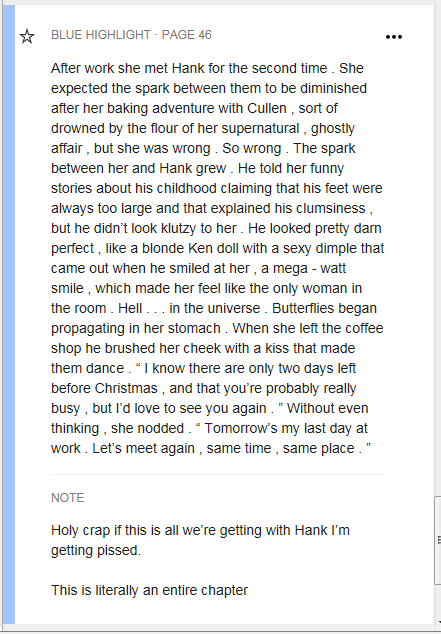 Yeah… This is not good.

Like the blond Ken doll she describes Hank as, the guy has literally no personality. No interactions with Maddy other than this. He’s there. He’s a prop. You could replace him with an actual Ken doll,  and you’d have about the same amount of chemistry.

He’s not the guy we’ve been rooting for. He’s not set up as the lead. He’s not even set up as an option. Like we get hints that Maddy is looking for someone, but the assumption is that she’ll be with Cullen. Find happiness with Cullen. Or find some mystical way of making things work.

It’s happened in other paranormal stories. There’s no indication that what the series is going for is a Ghost ending until almost ¾ths of the way through. I got a hint of it around page 40… and then started ranting not long after. 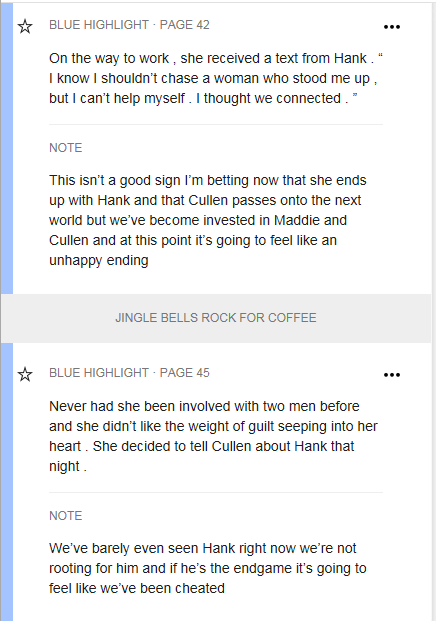 And despite my hatred of Cullen (which let me reiterate I hated Cullen more than I hated most Alpha Assholes), I was still angry at this pairing. Mostly because the author was fucking lazy. If she’d imbued Hank with even a smidgen of personality and spent as much time with Hank and Maddy as she had with Cullen and Maddy, then maybe, MAYBE, I’d be okay with how things turned out. But Cullen is literally our title character. He’s the Highland Ghost. He’s the character that we’re led to believe is endgame.

This is not how you write a fucking romance!!!

This is Game of Thrones levels of fuckery. Like I didn’t have a problem with what the ending of GOT was, just how they got there. The same is true here. If you want to twist that Cullen isn’t endgame, then don’t make us root for him. Don’t make him your title character.  Don’t make all of the cute flirting and banter be between Cullen and Maddy. And for all that is Holy don’t fucking info dump your final pairing.

Basically with all of this, it isn’t a romance. It does have a central romantic relationship at the core… just not the one that’s endgame. But what it lacks is an emotionally satisfying ending. It’s John Green or Nicholas Sparks levels of fuckery.

So considering that this isn’t a romance and it has a lot of problematic tropes, more grammar and spelling errors than is acceptable in a book that had three beta readers and one proofreader, unlikable characters, and poor plotting/pacing.

There’s really only one rating I can give this…

You can read this 59-page of WTFBBQ for yourself for free HERE!

If you want to see more of this kind of thing, please consider buying us a Coffee.  Or if you don’t want to do that, you can just use the Amazon link (which is an affiliate link) to do your post-holiday spending. It won’t cost you anything extra and it gives us a little something.

Thanks! And Happy Holidays!